The stainless steel horse would vibrate from left to right, up and down. The springs below the hoofs were raised at a certain angle so it would give the illusion of trotting. The horse was placed top and centre on a colourful and highly ornamented hood.

Traffic in Manila was scarce when I was a child and for once as the signal turned red- one could look forward to staring at the kitschy and brightly designed Jeepneys.  Each vehicle unique with its own streamers and colours; sometimes even with a full steed of horses.

The Jeepney is a popular mode of public transportation in the Philippines. It was originally constructed from the left over Willy U.S. Military jeeps from World War II.  As the U.S. troops started to pull out from the Philippines at the end of the war, the remaining surplus Jeeps were either sold or given to the locals as gifts. They were stripped down and altered, painted with vibrant hues and ornaments. The back was reconstructed with parallel benches to accommodate more passengers. People are made to sit facing each other in close proximity with their knees touching. The running joke is the Jeepney combines the root word “jeep” and “knee”-hence the name. But the true origin is from the word “jitney” which is an American slang for a nickel fare or a small bus that picks up and discharges passengers over a regular route which was popular before and during the war.

The unextended jeeps were called “owners” and are not used for commercial purposes. 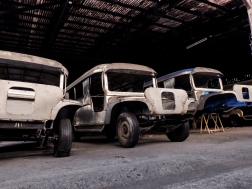 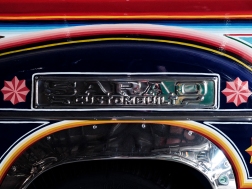 A close look into the Sarao workmanship. Photo by Josef Gadista

The initial interior of a Jeepney. Photo by Josef Gadista

The main lot of Sarao Motors in Las Pinas. Photo by Josef Gadista

A Jeepney body at Sarao Motors. Photo by Josef Gadista

Sarao Motors. Photo by Josef Gadista
The word Sarao has become synonymous with the vehicle. The company was first established in 1953 as a small automotive shop.  Entrepreneur Leonardo Sarao from Cavite earned a living as a kalesa (horse carriage) driver before becoming a mechanic.  He incorporated the airiness of the kalesa into the design of his jeep. Since the Philippines is a tropical country- the open sides serve well for cross ventilation- keeping passengers cool, when air-conditioning was still a luxury.

Other forms of transportation were virtually destroyed during the second World War and the country was left with little alternatives. The jeepney became the most used and popular form of public transportation in the Philippines next to the bus. It is an inexpensive way to get people around.  The government acknowledged their importance and began to issue special licenses to drivers and regulated their use, routes and fares.

The Sarao company outnumbered other manufacturers by 7 to one.  The Jeepney became a symbol of Philippine pop culture in the early 1960s.  The specialized Sarao vehicle was exhibited at the 1964 New York World’s Fair- Philippine Pavilion. It then travelled from Manila to London in 1971 and throughout Europe to promote Philippine Tourism and industry. A custom made Jeepney was manufactured by Sarao in 1981 for Pope John Paul II, for his first visit to the Philippines.
.
Sarao Motors is located south of the capital in Las Piñas city.   The vast lot still holds original pieces of various Jeepney designs.  However the once active factory has become more of a museum. It has seen better days. Upon entering, there are rows and rows of parked Jeepneys from various decades. Majority are in mint and pristine condition- some go as far back as 1955. Others remain incomplete with bare steel bodies; as if time has stood still.

Due to the rising costs of production the company had to downsize in October 2000.
Mr. Sarao died a year later at the age of 80.

The once bustling factory with over 350 employees has been reduced to a crew of 50. The collection department is the only section that is currently in operation. Sarao has tried to resume operations in a smaller scale; concentrating more on commissioned work.  The average output is 40 units per year, a far cry from their production when the company was at its peak.

There is no concrete program for the local automotive industry in the Philippines. It is unfortunate that foreign brands have taken the lead. The government has neither passed a law to protect Sarao’s design. Other manufacturers have reconstructed the original pattern with their own modifications- using cheaper materials and engines. The look varies in each region of the Philippines. The length, size and seating capacity has evolved through the years; however none can come close to the beauty of a Sarao.

The company is currently managed and supervised by Mr. Edgardo Sarao, the fourth son of the  legendary mechanic and entrepreneur.  It was through the grace of his father’s commitment and hard work that he decided to continue the legacy.

The lack of infrastructure and other modes of transit still make the iconic Philippine Jeepney relevant. “They’re here to stay. What other alternative do we have?” Mr. Edgardo Sarao quips. “Now that our LRT-MRT (train system) is constantly under repair, a Jeepney can always take minor routes around the metropolis and provinces. Without it, mobilizing the masses will be a monumental task. People still need a cheap form of public transportation.”

The company is in talks with local and foreign companies for a joint venture- looking to source the next generation of environmentally friendly Electric Vehicles.

The portly Mr. Sarao smiles as his eyes go into a small squint.
“We have high hopes- the entire work shop in itself is a museum, all that nostalgia.
It would be nice to have a Jeepney themed restaurant…Who knows?” he says with a laugh.

If luck would have it- the gears might just shift into the right direction and
the Sarao name will be great again.