An ongoing photo collection of insights around Metro Manila, Philippines 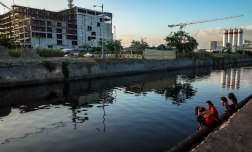 A group of young girls kill time near a stagnant water way. The Philippines has one of the highest cases of teenage pregnancies and HIV in Asia.

Mellon collie. A man sells freshly cut slices of watermelon along a busy alley in Manila. The Philippine population has reached over 100 million. 10% of which work overseas, mostly women. A quarter still live below the poverty line. January 2016

Intelligence without ambition is a bird without wings. -Salvador Dali Unfortunately the man caged the little one shortly after. Manila. 19th January 2016

Rows and rows of minute condominiums are being built at an alarming rate . Most remain unoccupied because an average family of 6 can barely afford a 21sq meter flat. 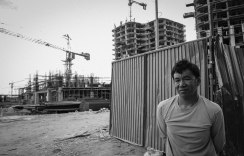 The Philippine daily minimum wage is Php 481 pesos or about $10. The current condominium rates are Php 149,300 (U.S. $ 3,179) per square metre. “I’ve been working on the same construction project for close to three years. I will never be able to afford an apartment which I helped build. Definitely, not in my lifetime”

A recent article released by Forbes warned- if the basic infrastructure and highways were not upgraded immediately the traffic dramas would worsen. Metro Manila is at risk of being uninhabitable in the next four years. The Filipino love affair with the automobile runs deep. It comes before the wife, mistress, work or kids. Easy access to loans will see an annual growth increase of 500,000 cars by 2020. There are a few alternatives however, the Tricycle (local Tuktuk) and the Kalesa ( horse drawn carriage). Take your pick. Manila January 2016.

Rows and rows of minute condominiums are being built at an alarming rate . Most remain unoccupied. January 2016

Lack of infrastructure and proper publication transportation makes getting around the city difficult.

More condominiums and casinos are being built across the city. More than a quarter still live below the poverty line. 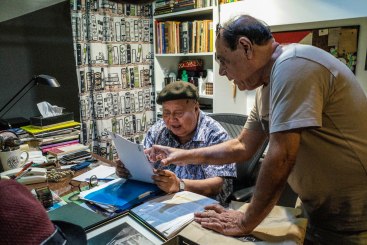 An odd friendship. My Dad hands Mr. F Sionil Jose an essay on Quezon by John Gunther, Inside Asia 1939. Apparently Philippine politics hasn’t changed much since. 2nd of February 2016 — at La Solidaridad. 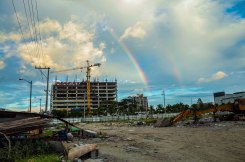 The once open green fields have been raised to the ground to build more condominiums. What’s at the end of this rainbow? January 2016 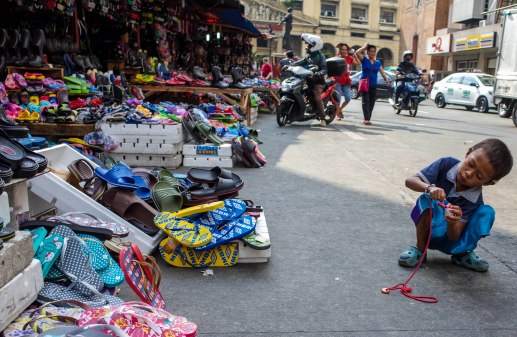 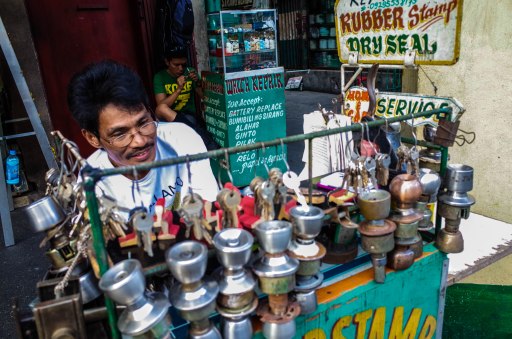 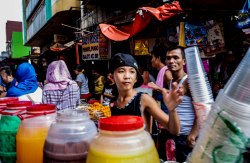 The heat is on. An array of refreshments. Manila January 2016

The onset of Summer. February 2016

Men at work. Two men work across the Santa Cruz Church in old Manila. It was established by the Jesuits in the early 17th century. The facade was originally Baroque but has seen numerous changes through the years. The Philippines is the only predominately Christian nation in Asia. January 2016