“Have you seen him?” I prick the squid ball, a gush of vinegar and sauce squirt out.  “No ma’am, not today”, the street vendor smiled as he threw more into the deep fryer.  “He did have an interview across the road again a couple of days ago.“

We usually meet at Church or at the local pub. Extreme? OK. So Jesus drank wine on the Sabbath. That pretty much defines the great actor that is Soliman Cruz.  If you’re not familiar with his work, a shame.  His life consists of playing significant roles in critically acclaimed independent films, the other half roaming the streets of Manila.  A minute section is spent by others looking for him. Myself included. 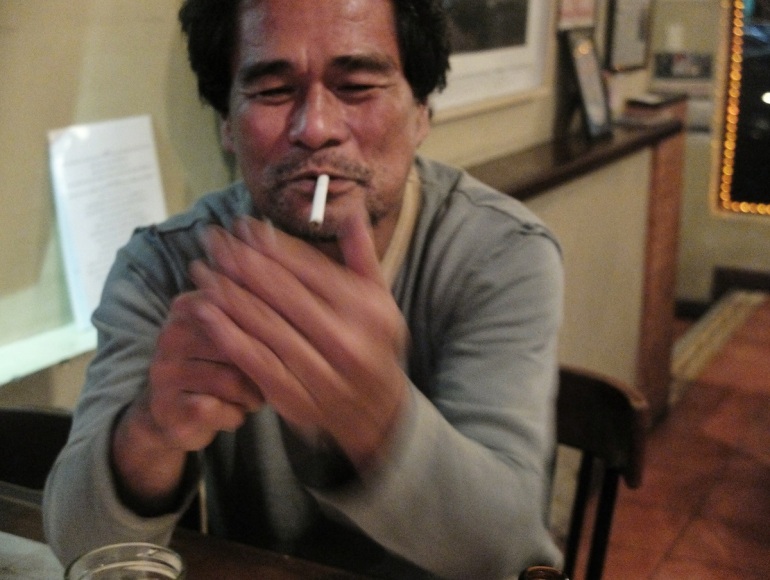 We were introduced many years ago through a common friend.  You’ll love the man as much as the camera does. Funny, explosive, wise and impossible to contain. Suppose it’s that hint of madness and eccentricity that can either be off putting or endearing. But his sense of freedom and spirit is what we all envy.

I decided to move away from the North of Manila where I grew up and head onto the grittier parts down south of Pasay and Malate. Makati and the Fort feel clinical. Change is good. The south used to be the melting pot of writers, actors, photographers, journalists and artists.  Now, Malate seems to be a shell of its self. If you look hard enough between the brothels and hovels there might still be a few gems. You’ll hear people reminisce- faded glories now replaced by dysfunction with a slight tint of local colour. Fate might play a hand for a chance to meet with some of the most talented and genuine people you’ll ever find in this city.

As I read the various newspaper clippings and documentaries about his life, the media forces to make sense of it all.  Soliman- “The addict, a wandering homeless schizophrenic.  A wasted talent. ” Even going to an extent of romanticizing his life ’of being lost then found’.  “Dead”.

It’s a gas.  An entire production crew lugging their equipment to follow one actor on the road. To prove what exactly? The world is challenged by someone so unconventional.  We are all safely contained in an egg with creature comforts. One man can boldly claim to live on the streets by choice.

We talk about his trips to the Hindu temple in Manila because he knows about my Indian heritage.  A free meal is given to a person of any caste, gender or religion. Your Seva (service) in return to the temple is to wash the plates in silence, to lend a hand. The simplicity of the whole ritual is humbling. Can understand his process, routines and ideals. Like a modern day Sadhu who renounces everything and chooses to live apart or on the edges of society. Learning from the environment and the people around him. Selfish. Maybe?  Unfair to his family, probably.  Quite a price to pay. I’m guessing he wouldn’t be as good an actor had he chosen a different path.

We missed each other on the last Sunday service. Turning up at different times. Sol made sure someone let me know he was there. Our names and numbers written in a little black book which he carries around with him. But never a phone call.

A couple of days ago as I enter our local pub, he follows through. Looks well. Groups of people welcome him asking for photographs or mention movies they’ve seen. Everyone wants a piece of the star. A room divided with judging eyes. And like a hundred times over, a person asks, “So is it true you still live near the seawall by the bay?”

Where is the kindness in that?

The conversation is cut short, as I reach over to hand him a drink. Sol looks relieved. “Shirin, I just saw my sister, I’m so happy, did my laundry over the weekend at hers.” he said. And just like every other night, we laughed and talked as old friends would.  A couple of hours later word went around, a certain director had been in search of the reclusive actor. The bar owner receives a message. Any sightings? Unlike a UFO this one is well known.

I watched over his belongings as he went out to look. Wonder how you could fit your life into a miniscule bag? Sol comes back to tell me it is the famous Lav Diaz. Their last film together was “Norte, The End of History. “ The award winning director had been standing outside with his assistant at a sari-sari store for the past 3 hours- on the hopes of finding him. Baffling.
We walk out into the street to meet the man.

Sol is promptly given a work date. Two days from the chance meeting. They sail to an undisclosed island to immediately start filming for the next 3 weeks as the lead.

“Why don’t you come back to mine tonight and we can move on from there? You know there will be no film without you…” Lav pleads.
“My mother, I have to visit my mother first- I’ll be there. Don’t worry I know where you live.” Sol exclaims. The director shakes his head. We all laugh and make our own way home from the dingy streets of Malate. The actor stays behind.

People under estimate the genius of Soliman Cruz. Instead of passing judgment or pity, replace it with some kindness.

His entire life is an art with a series of epic performances that cross all boundaries of film and society.

Sometimes we joke that we are just puppets in one of his elaborate theatrical plays.

Hell, quite lucky to be in it.